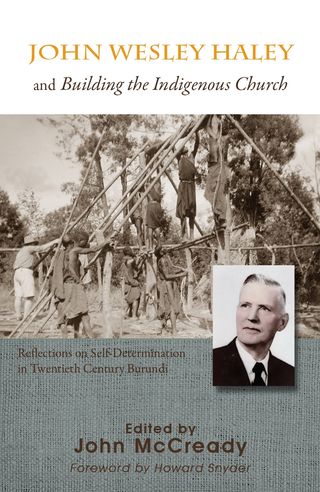 John Wesley Haley (1878-1951) was/is a relatively unknown Canadian Free Methodist missionary who served as a church-planter and pastor in Saskatchewan and Ontario as well as in Mozambique and South Africa (1902-1934), finally initiating new ministry in Burundi and Rwanda (1935-1946).

A new book, John Wesley Haley and Building the Indigenous Church, has recently been published edited by John McCready, Haley's grandson. McCready came across a manuscript that Haley was writing at the time of his death in 1951. He decided to bring the manuscript to life with some fresh reflection on Haley's life and ministry.

Haley has intrigued me for decades because of the attention he paid to the work of mission strategist Roland Allen. McCready knew of my interest and asked me to write a chapter for the book reflecting on Haley's influences and the significance of his work in light of present missiological thinking.

My chapter is, "The Mission Temporary, The Church Permanent," from a phrase Haley wrote emphasizing that the role of the missionary is only temporary, for proclamation and initial catechism, giving free reign for the Holy Spirit to direct the development of indigenous methods and structures, while the missionary moves on to a new, unreached, location.

When Haley wrote or taught about his approach in the 1930s and 40s he was seen as unusual, but respected. This manuscript may have been prompted by his invitation to speak at the EFMA/NAE conference in 1949 about his method in light of colonial tensions at the time particularly in East Asia, with the removal of all missionaries from China in the wake of Mao's revolution.

Dr Howard A Snyder writes a foreword where he states that Haley "is timely and prophetic today because of the way he conjoined theory and practice in pioneering deep church planting in Central Africa -- and reflected on this in his writings."