In 1989, Kathy and I moved to South Africa, when Apartheid was still in full swing. Up to that point, I would have said I had limited knowledge of issues in South Africa beyond reading The Covenant by James Michener and general knowledge from media coverage through the 70s and 80s.

Shortly after arriving, I heard this spoken word performance by one of the students in the seminary where I was teaching. I would say that I was profoundly moved and affected by this in a way that books and scholarly articles could never do. The author/performer was Tshokolo Marra. It was shortly after hearing this that Nelson Mandela was released from prison in early 1990. (I was going through file boxes the other day and found this -- which prompted this reflection)

By the Rivers of Apartheid

By the rivers of Apartheid we sit and weep

When we at the flow of blood look

There on the fast-growing stubbornness of government

And the blood of martyrs of peace and justice

is daily shed... by the rivers of Apartheid

For there our rulers declared the state of emergency

And said: "Be subject to the authority,

For authority is established by God" ... by the rivers of Apartheid

How can we be subject to government by minority

And live in constant fear and anxiety? ... by the rivers of Apartheid

If we keep quiet Christians

Better for us not to have been saved

Than to be saved and sit and wait

For the coming kingdom

While our families, relatives and friends

Are destroyed... by the rivers of Apartheid

If we do not announce the Good News

To the blind, the poor, oppressed, prisoners

And if we do not denounce Evil

(Evil done in the name of Law and Order)

Who else will do it? ... by the rivers of Apartheid

Where peaceful demonstrators met with resistance of SADF

Which killed and murdered people... by the rivers of Apartheid

The establishment of Bantu Education

Education for the poor and oppressed

Which makes them suffer from inferiority complex... by the rivers of Apartheid 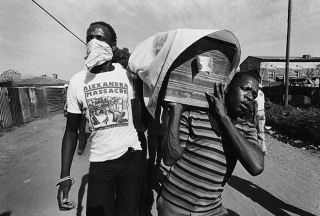 Thousand of school children were arrested

Many were killed, others fled the country

But the mystery remains

Where are the others? ...by the rivers of Apartheid

You are ambassadors of Christ

To stop the ever-flowing river

Which breeds violence, disorder and exploitation

...by the rivers of Apartheid.

Thanks Dan for reminding us where we come from, yes it was a painful past but thanks God we are now free. Continue to pray for us as Free Methodist in South Africa and the whole country.
Be blessed.
With love from Zwelisha and Petunia.

Thanks for posting this Dan. Some memories are ever present.
We love and cherish our memories of you and Kathy, Jared and Jamila and we are so grateful for all the help and blessings you brought to the Seminary and the church plant.