Last week my wife and I visited the National Gallery of Canada to wander through the new display, Canadian and Indigenous Art: From Time Immemorial to 1967. I'm always inspired to stand or sit in front of Tom Thomson's Jack Pine

or something by Emily Carr. This time I saw Yvonne McKague Housser's Rossport, Lake Superior.

I've seen it before but I was startled again by how significant that sight is -- of this little village overlooking the lake, just down the road from where I was born. Aside from the early Modernist colour scheme, that's pretty much my "impression" from the early 1960s. 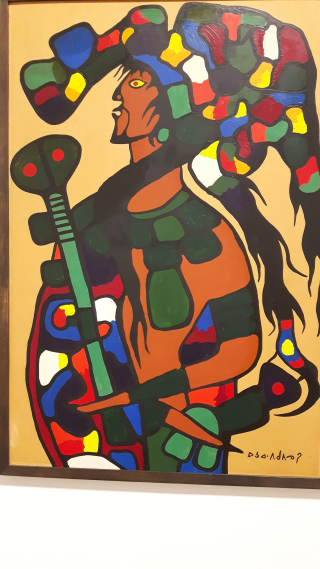 They also had a couple of Norval Morrisseau's pieces among many other indigenous artists that have been given a higher profile in the Gallery in preparation for the Canada 150 business. I have several Morriseau prints because I have been intrigued by his work since I was a kid. In the 1960s Morriseau lived not far from where I was born. Shortly after the kerfuffle with his work at Expo '67 he got a lot of press and certainly became a household name in my family. My father visited in his home around that same time period.

This morning as I was driving I listened to a podcast of Roberta Jamieson on CBC's Ideas program. Ms Jamieson is from the Six Nations of the Grand River, just outside Hamilton, where I live. She was recounting the history of indigenous and settler populations in Canada. I am continually amazed by how much of the history of colonial engagement and deception is unknown to large swathes of the Canadian population. [I think there is something about each generation needing to be retold the story, to give perspective on the present]

She also began recounting the steps that have taken place over the past 50 years to begin telling a different story. She mentioned that despite the perspectives of others, she would be celebrating Canada 150, because she sees reconciliation emerging in new and hopeful ways that haven't been there before. She feels the "Canadian" values of inclusion and welcome (although indigenous people have felt like outsiders for so long) are actually indigenous values that were demonstrated, practically, centuries ago, at first contacts with traders and settlers.

I would highly recommend listening to her talk, for history, reality and generosity of spirit.   https://podcast-a.akamaihd.net/mp3/podcasts/ideas_20170630_64034.mp3

One of her thoughts was that we need to move beyond apologies and neo-liberal/progressive hand-wringing (she gives a throw-away 'tsk, tsk' to the whole "cultural appropriation" debate from this spring), to concrete action. She says don't come with your ideas on "how to help us;" just come and listen and explore together the way ahead.

On that note, I want to share this link to another podcast talking to my friend Darryl (a school teacher in Saskatoon) about his walk through the Truth & Reconciliation Commission summary, and his own neighbourhood to listen, explore and learn to adjust and create new things together.