Kurelek’s Christmas Visions of the Incarnation 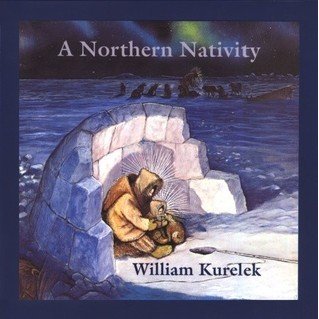 For years, while my children were growing up, I had a tradition of sitting down, sometime over Christmas, and reading to them from William Kurelek’s, A Northern Nativity: Christmas Dreams of a Prairie Boy. I didn’t grow up on the prairies but have lived there and hitch-hiked across Western Canada – when that sort of thing wasn’t frowned upon. So I can imagine myself in his settings, which also include other distinctive Canadian locales.

The book is a collection of Kurelek paintings with accompanying script versions of his dreams, around the theme of the Nativity of Jesus. The colour paintings reproduced in the book are typical of Kurelek’s mature style and are visually attractive, even to kids. The accompanying dream scripts may have meant more to me than my kids, but I read them anyway, often stopping to choke back tears as I read.

William Kurelek (1927-1977) was a Canadian artist, writer and a devout Christian. Of Ukrainian background, from Alberta, Kurelek graduated from the U of Manitoba with a degree in art and did studies at the Ontario College of Art, with further work in Mexico and Europe. Although baptized and raised Ukrainian Orthodox, he became an atheist in young adulthood, before converting to Roman Catholicism at 30. He remained a committed Catholic until his death by cancer at 50.

Kurelek based this book on his own childhood dreams coupled with his adult life experience -- on the theme of the Incarnation, that Christ came to all people, everywhere. What would happen if Joseph and Mary arrived at a prairie farm house? He imagines that the nativity takes place in northern snows. He dreams that the Christ child is born to Eskimos (sic), to Indians, to Blacks, that the Nativity takes place in a fisherman’s hut, a garage, a cowboy’s barn, that the holy family is given refuge in a city mission, a grain barn, and a country school.

Kurelek’s paintings and dream scripts are quintessentially Canadian. Published shortly before his death, Kurelek engages with the diverse cultures present in the Canadian landscape. This would have been a theme much on his mind as an adult living through the 1960s and early 70s in Canada. Of Ukrainian background, it was the question of what to do with the Eastern European immigrants who had flooded into a Western European Canada that helped spark the Royal Commission on Bilingualism and Biculturalism (1963-69) and the subsequent policies on multiculturalism that continue to inform our public space. 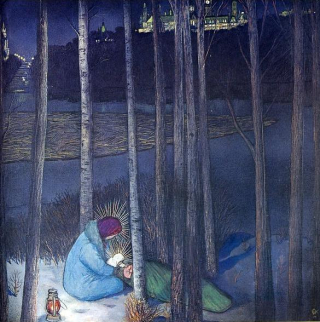 One very poignant image is of Mary and baby Jesus reaching out to a young man sleeping rough and cold under some trees on a riverbank – in the background we see a view of the Parliament buildings in Ottawa from the Quebec side of the river. Kurelek asks, what if the Child reached out to those deliberating on the Hill? Would he be received or rejected?

During the Advent season, we focus on the first coming of God Incarnate, Emmanuel, and reflect on the Second Coming with its promise of the restoration of all things as God intended. In this in-between time of waiting and expecting, we are reminded by David Fitch that God “requires a people tending to his presence to make his presence visible for all to see.”

Kurelek’s images in Northern Nativity give a glimpse into the places, and the people among whom that presence needs to be made visible.