george jones, may he rest in peace

Classic country singer George Jones died last week (Apr 26, 2013). I remember coming across one of his albums in Herb Winslow's collection of vinyl, circa 1968 (I was 8 yrs old), in Current River, ON. Really, it was George's unique face and brush cut that stood out from that album cover.  It would be many years later that I would really come to love the sound of his voice.  Here's a tune reflecting his conflicted life...

This past weekend was my 8th Labour Day

Weekend as a volunteer at the Shelter Vallley Folk Festival, located in a farmer's field betweeen Grafton and Colborne, Ontario. 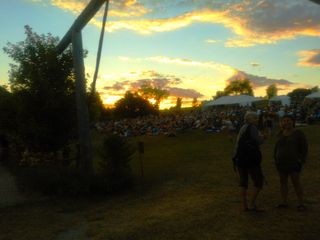 I spend the weekend with my daughter and son camping on the side of hill overlooking Lake Ontario, doing a bit of work here and there and listening to great singer/songwriter folk music. 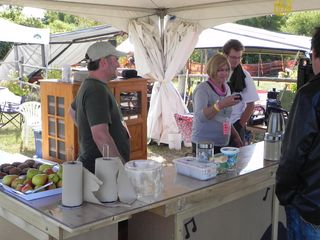 Two of my brothers and my sister, with spouses and various kids, also participate so its a great time together with family, doing something constructive :) Our volunteer task is to operate the coffee shop on the grounds; serving fair-trade/organic coffee, apple cider, ice coffee, hot chocolate, tea, cookies, muffins, fresh-made apple crisp, apples and pears. [that region of south-eastern Ontario is known for its fruit and vegetables]

This year there were 15 performers/groups, plus numerous other musicians including stage hosts and local singer/songwriters.

I think my favourite ne w find was the Newfoundland group, The Once. This trio of musicians and vocalists has an understated string-instrument sound focused on the lyrical content of lead singer, Geraldine Hollett. The group always connects a brief story with each of their songs giving added emotional depth to the lyrics. This video gives a picture of their vocal quality; listen as the pub goes silent...

Another thought from Bryan Stone...

This "personal relationship with Jesus" is fed and nourished by the narcissism and individualism of Western culture, so that just as I might employ a personal trainer, a personal assistant, or a personal masseuse, I can also enjoy Jesus as my personal Saviour. In thus locating the meaning of salvation within the individual and in terms of a private and interior decision aimed typically at otherworldly and eternal consequences, conversion is emptied of the public, visible, and communal allegiances that participation in God's reign demands. What finally matters is not God's reign "on earth as it is in heaven" but God's reign in my heart or in heaven after earth is gone. The ethical and ecclesiological dimensions of the gospel have now been reduced to mere "implications" -- afterthoughts to be worked out later -- rather than the very reality to which an acceptance of Christ's lordship is intrinsically a conversion.

this past Sunday it was our responsbility to bring something snack-like for our house church worship gathering... well, local strawberries are in season so that's what we got. Strawberries and ice cream at 10:15am kind of helped to centre our worship time :)

My nephew-in-law David Newland has a great little tune he wrote about this. Listen to this clip from my brother's backyard, last year.

josh garrels -- music for the soul and mind

Thanks to Al D. for pointing me in the direction of Josh Garrels, a great singer-songwriter.

So far, this is my favourite -- a revisiting of the old gospel song, "Farther Along"

Tempted and tried, I wondered why
The good man died, the bad man thrives
And Jesus cries because he loves em’ both
We’re all cast-aways in need of ropes
Hangin’ on by the last threads of our hope
In a house of mirrors full of smoke
Confusing illusions I’ve seen

Where did I go wrong, I sang along
To every chorus of the song
That the devil wrote like a piper at the gates
Leading mice and men down to their fates
But some will courageously escape
The seductive voice with a heart of faith
While walkin’ that line back home

And one day when the sky rolls back on us
Some rejoice and the others fuss
Cause every knee must bow and tongue confess
That the son of god is forever blessed
His is the kingdom, we’re the guests
So put your voice up to the test
Sing Lord, come soon

Just returned from another great weekend of camping, volunteering, hanging with hippies, and some great singer-songwriter folk music. The Shelter Valley Folk Festival is an annual tradition (now 7 years) for myself and my daughter and son. [my wife Kathy has her own traditions for Labour Day but they don't include tenting for a weekend!]. And here on my blog, I give a review of the musicians I really enjoyed.

For me, one of the necessities for a folk musician is the ability to engage the audience through both word and song -- to connect the meaning of a song (perhaps never heard before) with an audience member's lived experience. So is it possible to connect a black man from Maryland with a basically white audience from eastern Ontario? If your name is Vance Gilbert, yes it is. He performed several memorable songs along with fantastic conversation, one of which was "Old White Men" -- you can view a rendition of the song here on youtube (altho not from SVFF).

Leela Gilday is Dene from Yellowknife and really gave an interesting glimpse into First Nations life, as well as the everyday experiences of any of us. [I would recommend listening to her "Calling All Warriors" at that link]

Altogether I listened to 4 performances at the festival of Mike Stevens & Raymond McLain. They are a harmonica and banjo/fiddle duo, which sounds a bit hokey until you here them play together. However, I first heard Raymond McLain play banjo back in the seventies at the Kingston Bluegrass Festival, with the McLain Family Band (from Berea, Kentucky), led by his dad. Here is a clip of their family back in those days (watch the first 3 minutes or so). McLain is also a college music professor -- here are some of his students a couple years ago. At SVFF Stevens was the feature performer and McLain justed backed him up. I'd like to see a performance the other way around.

a friend from days gone by, Dr Michael Gilmour, now a prof at my alma mater, has written a book about Bob Dylan, "The Gospel According to Bob Dylan: The Old, Old Story for Modern Times."  CT published an excerpt to celebrates Bob's 70 birthday this week.

I taped a photocopied picture of Bob Dylan to my office door during the time I spent thinking about and writing this book. It is my favorite picture of the singer, taken likely in the fall of 1975. He is standing in a cemetery by a large crucifix, in the Catholic grotto in Lowell, Massachusetts. Jack Kerouac's grave is in this cemetery, so the motley crew touring with Dylan at the time stopped by the Beat writer's hometown to pay their respects. There are other photographs of this visit to the Lowell cemetery showing Dylan and poet Allen Ginsberg sitting cross-legged at Kerouac's grave.

The picture on my office door shows Dylan standing in front of the tall statue, his feathered hat just inches below Christ's nailed feet. He carries a large tree branch as a walking stick while the camera looks up into his face, capturing both the singer's stoic expression and the Messiah's agony all at once. The picture has symbolic potential that illustrates challenges facing those interested in Bob Dylan's relationship to religion.

if you haven't found Mumford & Sons, a British folk rock band, its time you did :)

Love that will not betray you, dismay or enslave you,
It will set you free
Be more like the man you were made to be.
There is a design,
An alignment to cry,
At my heart you see,
The beauty of love as it was made to be

missional, shalom-communities will, among other things, find innovative forms, times and places for communicating that God redeems. we are the 'called-out' people of God so that we may declare the praises of him who called us out of darkness (1 Peter 2:9). In my view, these folks are thinking in the right direction...